We use cookies to ensure that we give you the best experience on our website. If you continue to use this site we will assume that you are happy with it.Ok
Fitting

How to put on a bra and how to take it off.

How to put on a bra and the different closures.

There are several ways to hook a bra depending on the position of the closure and your flexibility. While most bras have a back closure, some of them can have a front closure.

Most bras have a back closure. It is most generally with Hooks an Eyes. The hooks and eyes allow the band to be adjusted with 3 sets of eyes.

In the case of the back closure, some woman prefers to hook it on the front and then turning the bra around their body, then putting on the straps.

The right position for the hook and eye is when the bra feels snug but doesn’t dig in the body. Too loose it would not offer any support. If your bra size is correct it is normally on the second of the 3 hooks and eyes, right in the middle.

The second step is to adjust the straps. The support of a bra should come 75% by the band and only 25% of the straps. The straps should not be too tight to dig in the shoulders. That would cause discomfort and bad position. If the straps of the bra you are wearing are digging far too much on your shoulder and that you feel that looser, the bra would not support your breast, which means that you have the wrong bra size or that it is the time to change bras.

The third and last step would be to position your bust nicely into the cup. To do so, you will have to lift gently and especially only from the bottom of your bust to place them nicely in the cup. Do not lift your bust by pulling the skin of the top of your breast as it will cause damage and create on the long turn your bust to drop.

How to remove a back closure:

Now for the man that would like to know how to remove a bra from their partner. For information, 90% of the woman would have a bra that has a back closure. So to remove it there would be hooks and eyes that are clipping the bra in position. Softly pull the 2 parts of the back of the bra close to one another and lift the top part. The hooks should be released and the rest is your imagination.

The front closure can have several details. Some are with buttons and loop (like this picture attached), some are with a metal clip. They are very easy to put on with no problem with being or not flexible. The only problem with that kind of closure is the lack of adjustment. Depending on the day of the month, the breast can vary in size. The front closure is less flexible in this case. It is also great more for smaller bust sizes than the larger ones, due to the smaller space between the 2 breasts in the larger sizes.

How to remove a front closure:

Front closure are much easier to put on and especially to take away. In a case of a metal closure, the 2 parts of the metal closure need to unclip with a movement from back to front. When the sound of the unclip has been heard, slide the 2 parts in the opposite directions, up and down. 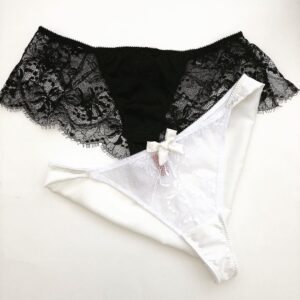 How to take care of your sheer lace panties